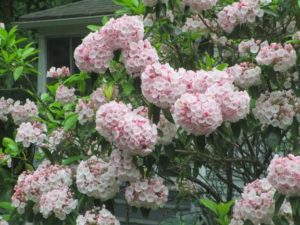 If you find a fawn, “Odocoileus virginianus,” seemingly by itself, leave it. Its mother is probably nearby, waiting for you to leave. If you come across a snapper, “Chelydra serpentine,” that needs to be moved from, say, a road, move it to safety in the direction it is traveling. It probably is a female, heading to uplands to lay eggs or returning to water after laying eggs. BE CAREFUL WITH SNAPPERS. More Piney lore, “Only the setting sun or lightning makes a snapping turtle let go.” I move them with a shovel, preferably a big grain shovel. Joey lore, “If a snapping turtle bites and will not let go, shove a wire in its nostril. Or maybe a flashing light will make it let go.”

Mountain laurel’s scientific name is “Kalmia latifolia.” The genus name comes from Pehr Kalm, a European botanist who worked in the South Jersey area in the 1700s. He published the influential “Travels into North America.” The plant’s species name is Latin for “broad-leaved.”

A SHORE GARDEN: On a newspaper reporting freelance story, I was at the home of artist Laura Petrovich-Cheney and her husband, educator and craftsman Peter Cheney, in Asbury Park, Monmouth County. Their property is on Deal Lake. There, a great egret, “Ardea alba”, and red-winged blackbird, “Agelaius phoeniceus,” flew along the lake. Purple martins, “Progne subis,” nest in houses on the property. In the gardens were various flowers in bloom: roses, poppies, daylilies (budding), peonies, yarrow, and trumpet vine honeysuckle. Also in gardens were Tears of Mary, tomato, eggplant, cucumbers, herbs, raspberry bushes, and a fig tree. 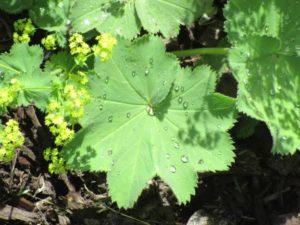 “Tears of Mary” plant in the Petrovich-Cheney and Cheney garden in Asbury Park, Monmouth County. 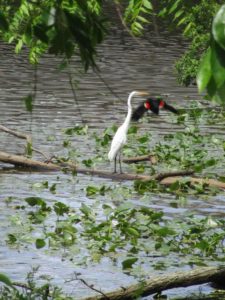 A red-winged blackbird flies past a great egret on Deal Lake at the Cheney and Petrovich-Cheney garden.

BIRD BATHS IN THE YARD: When my birdbath broke a few years ago, I took the bath part and laid it on the ground. When that had seen its days, I started using a garbage can lid, laying it on the ground. Now, I use large saucers – two in the backyard along the fruit and vegetable garden and one in the front yard. They are used by various animals: bird; squirrel; “Sciurus carolinensis”; and neighborhood cat, maybe even by skunk, “Mephitis mephitis”; chipmunk, “Tamias striatus”; raccoon, “Procyon lotor”; and ground hog, “Marmota monax.” 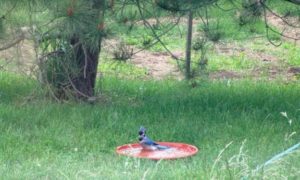 A blue jay, “Cyanocitta cristata,” in one of my backyard bird baths.

WATERING THE GARDEN: I water the garden before 10 a.m. so as not to lose water to evaporation in the heat of the day and so the garden dries by nightfall, preventing fungal growth. I use two watering methods – one, by sprinkling can if I have enough clean water accumulated (from rain, the cellar de-humidifier, and so on) and, two, by running a sprinkler. Sitting there with a cup of coffee and watching the sprinkler go back and forth is so relaxing. This week, a mourning dove, “Zenaida macroura,” joined me. 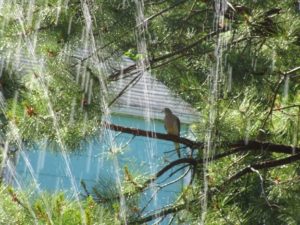 A mourning dove perches in a pitch pine – “Pinus rigida,” transplanted to my backyard from a Pine Barrens woods in Monmouth County – and hangs out with me as I watched the sprinkler water the garden.

BUTTERFLIES: As I have mentioned before, I am noticing a lot of tiger swallowtails, “Papilio glaucus,” the females black and the males yellow, this year. I usually cannot shoot a good photograph because they do not sit still. This week around my garden, I had a very cooperative female, allowing me to photograph away. 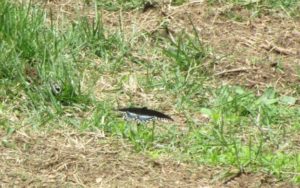 A female tiger swallowtail cruises over my garden. 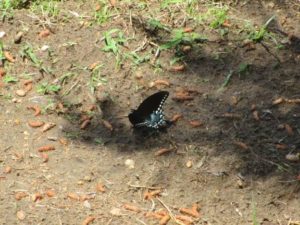 She rests in the garden.

DELAWARE RIVER AT FIELDSBORO: I was along the Delaware River near Fieldsboro, Burlington County. This is where the river transforms from commercial shipping (here and south) to recreational (here and north). Although the water here is fresh, there is a tidal effect as far north on the river as the area of Trenton, Mercer County. 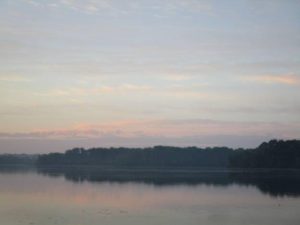 Dawn on the Delaware River, looking toward the area of Fieldsboro, Burlington County.

CLOUDS: Over the last several months, clouds have been spectacular. On the evening of May 31, Wednesday, I was along the Delaware River in the Fieldsboro area. It was clear where I was, but to the north were storm clouds with occasional streaks of lightning. The lightning was too sporadic for me to catch a photograph, but I shot pictures of the storm clouds and sunset. (Tip on photographing lightning: If the lightning is flashing near enough to one another, do not try to catch the flash. Instead, just keep on cranking pictures and hopefully there will be a usable shot of lighting in the batch – and hopefully you were not struck by lightning!) 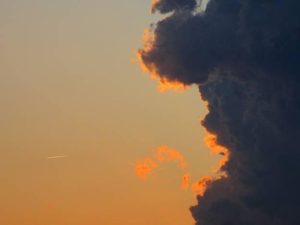 Man in the cloud blows fire at a jet along the Delaware River.

LIGHTNING: A few years back, a Jersey Shore beachgoer at the Atlantic Ocean in clear weather was struck and killed by “out of the blue lightning” because, despite the clear weather at the beach, a thunderstorm was near enough. So, play it safe. The rule I follow, “If you hear thunder, you can be struck by lightning.” Seek cover.

NIGHT SKY: At dawn, look for the bright “star” in the East – the planet Venus. The Full Rose Moon is Friday, June 9. On Saturday, June 3, I stood on my back porch and looked at the moon, with the planet Jupiter just off it. I find it fascinating I can stand in my yard and look at the wonders of the night sky in the home I grew up in – and followed the USA-Soviet Union “Space Race” in the 1960s. Turn off the outside lights, let your eyes adjust for 20 minutes to 30 minutes, and enjoy a naked-eye view of the Night Sky. 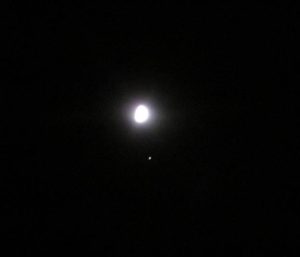 The planet Jupiter aligned with the moon on the night of Saturday, June 3.

UNDER THE PORCH: After working an overnight shift, I came home to find a pile of dirt under one of my back porches, the one at the Florida room. Enough dirt in the pile to fill a wheelbarrow. I suspect a ground hog. I raked up the dirt and moved it to my garden, where I likely will rake it out in the fall. As for the animal hole, I let it be. Wildlife is welcome in my yard, but I prefer it does not mess with my vegetable-fruit garden. 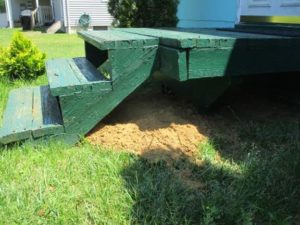 The work of a ground hog, I presume. 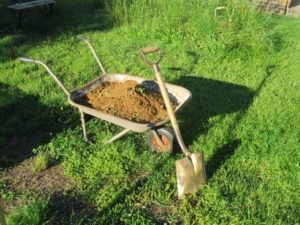 Off to the garden with the dirt. I can always find a use for it.

MY GARDEN: I continue with the three Ws – water, weed, and wait. The cool weather plants of lettuce and carrot are growing nicely, but the pea are lame. As for the warm weather plants, cucumber, mushmelon, and sweet corn, along with zinnia, are poking through the ground. No sign yet of tomato. (And I am thinking I may abandon planting tomato from seed. I am considering for next year buying plants and transplanting them into the garden.) 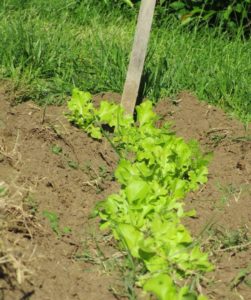 UPCOMING “GARDEN AND AFIELDS”: After I publish a “Notes from Garden and Afield,” I panic, thinking, Will I be able to fill next week’s issue? Then, I realize there is plenty happening afield and in the garden. Alas, because of a scheduling conflict I have, “Notes from Garden and Afield” will not publish June 11. The plan is for it to return June 18. Meanwhile, check out on your own what is happening afield and in the garden. 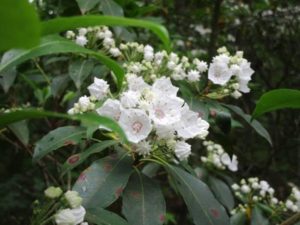 Mountain laurel, in bloom and about to bloom fully, in Jamesburg Park.