Three generations of eagles have cast their shadows over the land along the South Branch. Eagles are often seen but not recognized because the white head and tail are not developed until the 4th or 5th year.

A large dark bird perched on a light gray branch of a dead tree that hung low over the South Branch. I was quite a distance upriver, my attention focused navigating the shallow water when I caught sight of that dark, solid brown bird. Thinking it was a large hawk, I pulled the camera from the bag in the event I might get near enough for a photo. I aligned the canoe with the current when I was quite close, traded the paddle for the camera and began to click away. I drifted directly under the co-operative bird and began to wonder at the exceptionally large beak. I couldn’t imagine that after viewing the images online, I had been in the presence of a juvenile bald eagle. 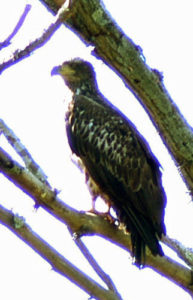 That event occurred in the spring of 2011. It was the very first time I ever saw an eagle on the South Branch and almost discounted it as an oversized, unidentified hawk.

Since 2011, I had been seeing more eagles of different age groups in that same area and in December of 2014, the first sticks were assembled into a nest. By late March 2015 eggs were being incubated and two eaglets hatched in April and banded in May with green aluminum bands E14 and E15.

Up to that point eagles had existed for most people only as a concept or an image on coin of the realm or marketed products with a patriotic flare.

The question now on eagle watcher’s minds after the 2015 success was what would happen next year? Would the eagles return? Would they use the same nest? Was the nest too close to human activity and be abandoned?

Late December 2015 a pair of adults thought to be the same eagles from the previous year, began to build a new nest opposite the old nest. It seemed quite a random decision and in human terms, spiked with a heavy dose of humor attributed to the obsessive behavior of one of the pair. they have a perfectly good nest, why are they building another?

Eagles have been known to build nests and not use them, sometimes called, practice nests, as a best guess. In any event, the nest went up in record time and another pair of eagles hatched, banded and fledged in the spring of 2016. That year the eaglets were banded with green bands bearing E43 and E44.

Reputed to mate for life, eagles tend to go separate ways after raising their young, often to far off destinations. One of a local pair had been tracked to Long island and the other to

Philadelphia. Given the vagaries of nature, sickness, accident and foul play it is somewhat miraculous they meet again, same time, same place, to raise another brood.

In late 2016 the eagle’s nest was destroyed and hearts sank for the production a third generation of new eagles on the South Branch.

Our eagles would not let us down as sticks began to reappear and another new nest was constructed. Speculation was ripe with concern that it was too late or the disturbance would discourage the eagles from mating and laying eggs. Right on schedule eggs were laid and two eaglets hatched in the spring of 2017. Banding took place in May and green bands E57 and E58 were affixed to the legs of a feisty pair of 2017 South Branch graduates.

Three years in a row, two eagles produced and fledged six offspring along the South Branch. In that nest they delivered three generations of eagles to someday impress the children of today’s children with the spectacular view of a wild and free eagle casting its shadow across the land.

This eagle pair has demonstrated persistence, patience, devotion and tolerance with their presence along the South Branch; Qualities that would serve all communities well to embrace.

Author’s note: See winterbearrising.wordpress.com bottom of gallery2, for age difference by plumage and a video snippet from the 2017 eagle banding.