Article and Photos by Joe Sapia

Note: The yard references are to my house in the section of Monroe between Helmetta and Jamesburg in South Middlesex County. My yard is in a Pine Barrens outlier on the Inner Coastal Plain, the soil is loamy, and my neighborhood is on the boundary of Gardening Zones 6b (cooler) and 7a (warmer). Afield references are to the Pine Barrens around Helmetta, unless otherwise noted. Photographs are for the period covered, unless otherwise noted. 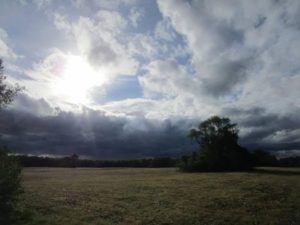 VAN DYKE FARM: A favorite place to shoot photographs of mine is the Van Dyke Farm at Pigeon Swamp in South Brunswick/Middlesex County. It offers big-sky views to the west and the setting sun. See http://www.middlesexcountynj.gov/About/ParksRecreation/Pages/PR/VanDyke.aspx.

SOURLAND MOUNTAIN: I hiked one of my favorite Midlands places, Sourland Mountain on the boundary of Somerset, Hunterdon, and Mercer counties with a club I have been a member of for about 35 years, the Outdoor Club of South Jersey. On the mountain, I saw various flowers in bloom: showy orchid, “Galearis spectabilis,”; rue anemone, “Anemonella thalictroides”; and spring beauties, “”Claytonia virginica.” Being on the Piedmont with its rocky terrain, Sourland Mountain is much different than my generally flat and sandy Pine Barrens around Helmetta. 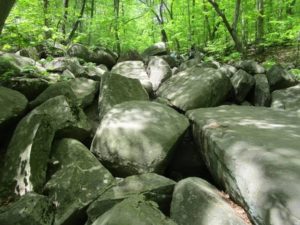 The Roaring Rocks boulder field on Sourland Mountain. Notice the hikers in the upper part of the photo. 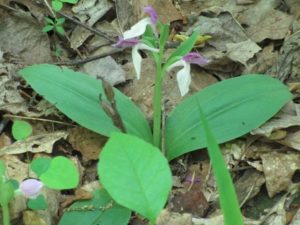 A showy orchid on Sourland Mountain

FLATLANDERS VERSUS HILLTOPPERS:  For purposes of this writing, New Jersey has four geological areas, which run northeast to southwest:  from west to east, Ridges and Valleys, Highlands, Piedmont, and Coastal Plain. (The Coastal Plain can be divided into two areas, Inner and Outer, making it five regions.) Generally, the Midlands are divided into the Piedmont and Coastal Plain, with distinct characteristics. The generally flat Coastal Plain has white, sandy soil (think Shore and Pine Barrens) and dark soil (think conventional farming areas). The rolling Piedmont has red shale and traprock boulders. 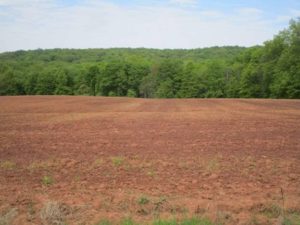 Piedmont red shale at Sourland Mountain, which is in the background. 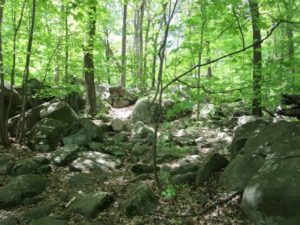 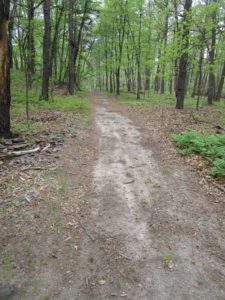 White, sandy soil in the Pine Barrens of Helmetta on the Coastal Plain.

FULL MOON AND PLANTING: The full moon was May 10, Wednesday, and some feel it is OK, now, to plant warm weather crops. Not me, especially with the cooler weather we have been having. I am still waiting for May 20 (if it warms up) to June 1 (if it remains on the cool side). Then, I will plant my warmer season crop – tomatoes, mushmellon, sweet corn, and cucumbers, along with zinnias to attract pollinators and for their beauty. 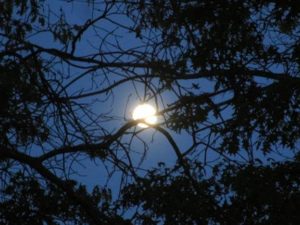 The near-Full Corn-Planting Moon. The full moon was Wednesday, May 10.

KEEPING WILDLIFE AWAY, CAYENNE PEPPER: I was talking a waitress at the Dayton Diner in South Brunswick/Middlesex County. An experienced gardener, she recommended using cayenne pepper as a method of pest control around the garden. I plan on trying that.

ALONG THE SOUTH RIVER: My travels took me across the South River at Old Bridge village on the boundary of Old Bridge, Sayreville, and East Brunswick, all in Middlesex County. On my way back, I stopped to shoot photographs between Old Bridge village and the New Causeway on the boundary of South River and Sayreville, both in Middlesex County. The South River is formed by the meeting of Manalapan and Matchaponix brooks on the Spotswood-Old Bridge boundary at DuHerNaL Lake/Middlesex County. (DuHerNaL Lake gets its name from the three companies that had used it as a reservoir: DuPont, Hercules, and National Lead.) Normally, I do not think of inland self, 25 or so miles from the Atlantic Ocean, living near salt water, but the tidal effect begins at the bottom of the DuHerNal Lake dam, only a little more than 4 miles from my house. 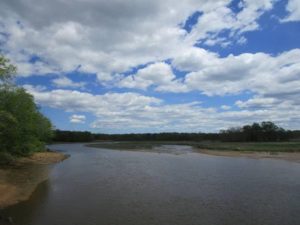 The South River at low tide at Old Bridge village. 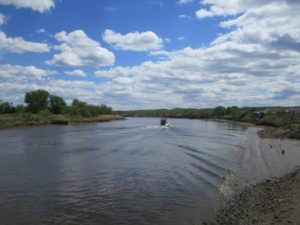 KILLDEER: When I was at the South River at Cannon Brothers Park in South River, I spooked a killdeer, “Charadrius vociferous.” The species screeches a “kill-deer” call. Because of the way the bird was acting, panicked but not leaving the area, I suspect it had a nest nearby it was trying to divert me from. An adult killdeer will even fake a broken wing to get a predator to follow it, rather than have the predator attack the ground nest. I could not find a nest. 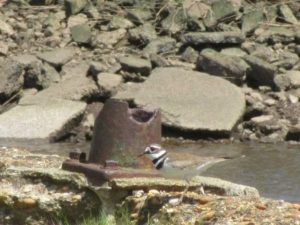 TURKEYS: Some thoughts from Bob Eriksen, the retired state turkey biologist, on “Meleagris gallopavo,” “…Wild turkeys that have adapted to suburbia will sometimes nest in among shrubs in a yard. I had one nest next to a gravestone in a cemetery. Most of the time turkey nests are in the woods or in an overgrown field. Hens will tuck in next to a tree trunk, at the base of a shrub, or in a blowdown, especially if there is a branch within a few feet. They like to have a bit of overhead cover. Once the grass in hayfields is tall enough to hide the hen crouched down (usually second week of May), a hen turkey will nest in a hayfield. Cover is the main consideration. Hens are pretty secretive approaching the nest. They may circle or use different approaches when they go to the nest to lay. When the clutch is large enough (10-12 eggs), she will begin to incubate. For the first couple of nights after she has completed her clutch, she may tree roost, but that changes fast. Once incubation begins, the hen will be on the nest 20 or more hours a day.” (A shout out to Bob for always being so helpful.)

JERSEY MIDLANDS LORE: Another good source of information is legendary Helmetta outdoorsman Ralph “Rusty” Richards, 84-years-old. During one of our occasional breakfasts of members of 100-year Helmetta families, Rusty was talking about deer-hunting. In the early part of the 20th Century, white-tailed deer, “Odocoileus virginianus,” were almost gone from New Jersey because of over-hunting. As the state brought them back, they gradually re-settled. About 1950, they were in the Broadway Woods area of South Brunswick/Middlesex County, only a few miles from Helmetta, according to Rusty. Then, about 1955, they were settled around Helmetta, Rusty said.

In 2011, Rusty Richards with “opienki” mushrooms, genus “Armillaria,” in the Pine Barrens around Helmetta.

BOBWHITE: Did I hear a bobwhite quail, “Colinus virginianus,” calling in my neighborhood? If so, it would have been a return to my childhood when one could hear the “Bob White” call at night. Bobwhites have become rare in New Jersey because of habitat loss, but, in recent years, there has been an effort to welcome them back. So, was it a wild bobwhite or not? I do not know….

TICKS: Reports are still coming in on how bad a tick season it is.
I am hearing reports of deer ticks, “Ixodes scapularis,” and lone star ticks, “Amblyomma americanum.” Various reasons may be causing the problem, including warm weather generating acorn growth and, in turn, the acorns providing abundant food to tick-carrying animals, along with the recent rainy weather. “More rain typically enhances tick season,” said meteorologist Steve DiMartino. 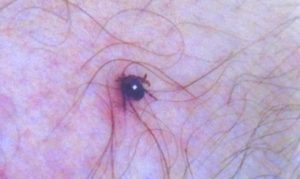 A lone star tick on my leg. Lone star ticks are easily identifiable by the yellow dot on their backs.

PINE BARRENS AROUND HELMETTA: Pink lady-slipper orchids, “Cypripedium acaule,” continue to bloom. I know of a spot that has about 75 lady-slippers, with about five in bloom. If you see a pink lady-slipper, look around for more in the area; I see them in clusters. And do not pick them! 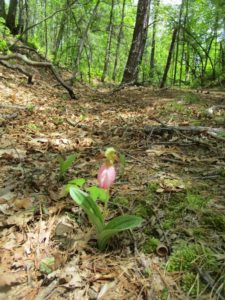 A blooming pink lady-slipper orchid, with another, left and to the rear of the blooming orchid, poking through the ground.

THE END-OF-THE-WEEK RAIN: I look to a thorough rain around May 15 to green up the woods for the season. The steady, heavy rain of Saturday, May 13, should have accomplished that. By late Saturday night as the rain continued, my rain gauge showed 2.3 inches. 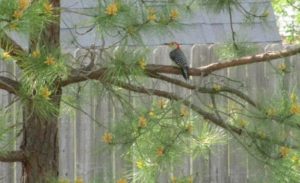 A red-bellied woodpecker, “Melanerpes carolinus,” sitting in a pitch pine, “Pinus rigida,” in my backyard.

Joe Sapia, 60, is a lifelong Monroe resident. He is a Pine Barrens naturalist and an organic vegetable-fruit gardener.
He gardens the same backyard plot as did his Italian-American father, Joe Sr., and his Polish-immigrant, maternal grandmother, Annie Poznanski Onda. Both are inspirations for his food gardening. Joe is active with the Rutgers University Master Gardeners/Middlesex County program. He draws inspiration on the Pine Barrens around Helmetta from his mother, Sophie Onda Sapia, who lived her whole life in these Pines, and his Grandma Annie.