Author’s note: The yard references are to my house in the section of Monroe between Helmetta and Jamesburg in South Middlesex County. My yard is in a Pine Barrens outlier on the Inner Coastal Plain, the soil is loamy, and my neighborhood is on the boundary of Gardening Zones 6b (cooler) and 7a (warmer). Afield references are to the Pine Barrens around Helmetta, unless otherwise noted. 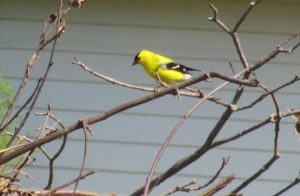 THE NEW JERSEY STATE BIRD: I saw an adult male Eastern goldfinch, “Spinus tristis,” in the yard and he was in his bright mating colors of yellow, black and white. Females and juveniles are duller in color.

“SNOWBIRDS”: I may have seen the last of the dark-eyed juncos, “Junco hyemalis,” for the season about April 17. These “snowbirds” will head north, possibly as close as North Jersey or Pennsylvania, possibly as far as Canada, and not return until the fall. I normally see their return to my yard around Halloween. 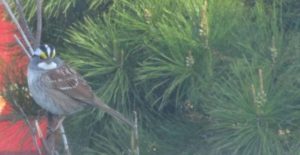 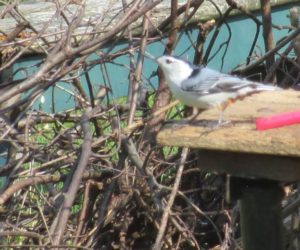 WHITE ROBIN: Hearing a report of a “white” robin in Cranbury Station on the boundary of Monroe and Cranbury, Middlesex County. Jean Wojaczyk describes it as having a pale orange chest and, basically, the rest being white.

BIRDBATHS: I got them filled at the normal backyard location and added another to the front yard. For years, I have used garbage can lids or shallow pans filled with water and placed directly on the ground.

HUMMINGBIRD FEEDER: Put it up April 16 to catch the “scout” hummingbirds, hoping to attract these early arrivals and, in turn, the others headed north. I have never been successful with hummingbirds, but I try again.

GREAT EGRET: Was able to photograph a great egret, “Ardea alba,” flying past my house. 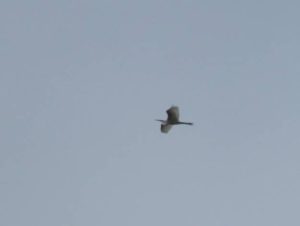 Great egret flying by my house. 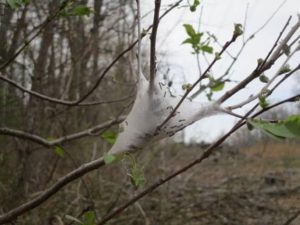 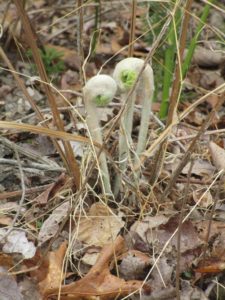 Cinnamon fern in its fiddlehead stage. 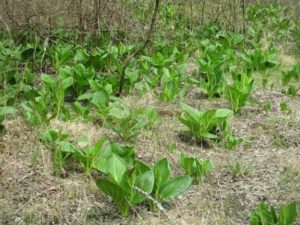 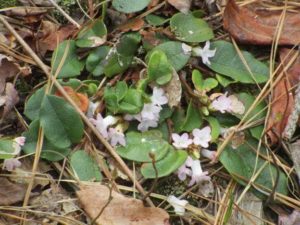 Trailing arbutus, “Epigaea repens,” – or “May pinks,” as Ma called them.

WANDERING BLACK BEARS: South Brunswick/Middlesex County, for example, had a sighting of a black bear, “Ursus americanus,” in recent days. So, just a heads up for the spring-summer roaming of bears. These wandering bears are likely to be young males, 80 to 100 pounds, chased off by older, larger males from traditional New Jersey “bear country” in the northwestern part of the state. So, the young males fan out, looking for their own territory.

CUTTING THE LAWN: I cut the lawn for the first time this season April 18 — and was aching that night.

WILD ONIONS: As I began cutting the lawn, I smelled onions – the wild ones growing in the lawn and now being mowed. I wish I liked onions more than I do, because there are plenty in my lawn.

SEEDING THE LAWN: As I maintain a no-fuss lawn and yearn for less and less lawn with more and more garden and wildlife patches, others want the magazine-looking lawn. I see these folks talking about seeding. Now is not the right time of year. Seed as early in September as possible and no later than mid-September is the advice I picked up a few years ago from the Rutgers University Cooperative Extension Service.

HOUSE PLANTS: I have about 30 house plants: devil’s ivy, spider plant, wandering Jew. On Easter Sunday, during my weekly-or-so watering, I was able to move some outside for watering, which is less messy, because it was so warm.

NIGHT SKY: Catch a look at the constellation Orion — easily identified by its belt of three stars before it disappears from view until the fall.

HUMAN-MADE OBJECTS IN SPACE: I always check out the night sky and, several days ago, I got a few-seconds view of a satellite or space junk. It was easy to pick out: moving across the sky, only a speck, not blinking. Not blinking because the light is the sun reflecting off it, rather than human lighting. So, as our sun-reflected view diminishes, the satellite disappears. 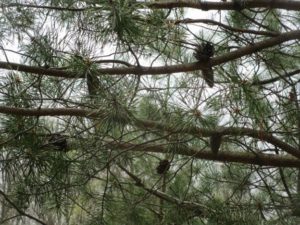 A Virginia pine, “Pinus virginiana,” in the Pine Barrens around Helmetta

Joe Sapia, 60, is a lifelong Monroe resident. He is a Pine Barrens naturalist and an organic vegetable-fruit gardener. He gardens the same backyard plot as did his Italian-American father, Joe Sr., and his Polish-immigrant, maternal grandmother, Annie Poznanski Onda. Both are inspirations for his food gardening. He draws inspiration on the local Pine Barrens from his mother, Sophie Onda Sapia, who lived her whole life in these Pines, and his Grandma Annie.