Areas which flood each spring are called vernal pools and attract several species of frogs. Each species produces a distinctive call, all in an effort to attract a mate. The orchestral performance this spring night was provided by spring peepers, pickerel frogs, green frogs and American toads. This green frog wears the equivalent of a lamp shade on his head after a night of froggy frolic.

The moon would not be full until the next night, though the difference could not be told without a lunar calendar. As the moon rose above the horizon it was shrouded in low clouds and tinted orange by the earth’s atmosphere. The moon appeared as if hiding behind a shear white veil, drawing more attention and holding a glance until it became a stare.

From the highpoint above the river, the first full view of the moon rising thru the thin white haze was screened by a loose weave of fine treetop branches. The delicate stems stood out in sharp contrast against the brilliant orb and moonlit clouds.

A tall cherry tree, growing out of a line of dark pines on a low ridge parallel to the river, perfectly balanced the moonlit scene with a staircase of blossoms turned luminous in the rising light.

A landscape painter could ask for no better inspiration than presented on this spring evening.

The overgrown path to the river was paved with fragments of white flowers from the blooming thornapple trees. The small round petals took on a glow in the rising moonlight to mark the trail, making it easier to follow.

A chipping sparrow, out later than it should have, hung onto a stem of tall amber broomsedge grass, as if it were a pole vaulter, caught in midair, hanging on to a pole at maximum flex.

The slow moonrise was reversed, as the trail to the river descended and hid the moon below the horizon.

Before the full moon reaches its zenith, visibility is lost in a temporary moment of deepening darkness, though a sense of night time vision may be provided by listening to the sounds of nature.

The call of geese from the river vibrated through the darkness to dominate the night. Their conversation was even and constant as they settled in for the night.

Their calls would pick up in response to late arriving flights validating a safe harbor below.

At night, geese dispense with circling and come right in with wings set and feet outstretched for touchdown. The sound of geese landing on water at night is a gentle extended, woosh, as their feet skim the water’s surface to slow the landing speed, followed by a barely perceptible splash.

The wind whistling through the primary feathers on birds wings, makes an odd creaking sound to betray their otherwise invisible night time approach. Straggling flocks of common mergansers and wood ducks landed parallel to the shoreline, mid river, and then dispersed to spend the night on the water in some eddy or quiet water below a fallen tree.

When the moon rose high enough to shed its gossamer haze to float above any earthbound obstruction, the moonlight intensified and now reflected on the river. Each ripple appearing as a silvery diamond. The ducks and geese became silhouettes as they drifted across a bejeweled stream of silvery light as viewed from opposite the light source.

Occasionally a call from an unidentified bird could be heard among the intermittent wood duck whistling and goose banter. The calls generated speculation, perhaps a black or yellow crowned night heron or just an irritated great blue heron.

The steady drone of spring peepers went nearly unnoticed as white noise, as it was separated from the sounds along the river by a good quarter mile. When attention was focused on the spring peepers which dominated the vernal pools, the solo calls of competing pickerel and green frogs could be heard. Focusing on sounds in the night, coming from opposite directions, was like simultaneously listening to two radio broadcasts; each source competing for attention. 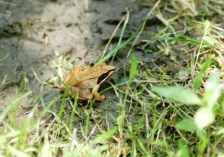 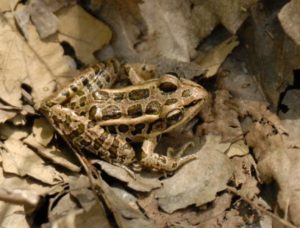 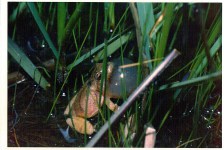