Article and Photos by Joe Sapia 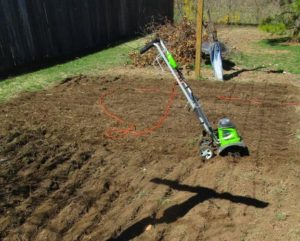 Turning over the vegetable garden

Author’s note: The yard references are to my house in the section of Monroe between Helmetta and Jamesburg in South Middlesex County. My yard is in a Pine Barrens outlier on the Inner Coastal Plain, the soil is loamy, and my neighborhood is on the boundary of Gardening Zones 6b (cooler) and 7a (warmer).

MESSING UP PREPPING THE VEGETABLE GARDEN: To get a jump on the vegetable garden, I sowed inside early season plant seeds of lettuce, carrots, and peas. That was a mistake. When I was transitioning them to plant outside, I killed them. I should have waited and planted them directly into the garden. So, I had to regroup….

Unflowering trailing arbutus, or “May pink.”

FLOWERING IN THE WOODS: Swamp maples have their red tinge of buds, along with the budding of “May pinks” (trailing arbutus). I saw a report trailing arbutus has already flowered in the main Pine Barrens to the south, but have not seen any beyond budding in the Pine Barrens around Helmetta.

BIRDS SINGING SPRING SONGS: I am hearing the birds beginning their daily singing about 6 a.m. to 6:15 a.m., or about 15 to 40 minutes before sunrise. The birds presumably are singing to assert territory and to attract mates. 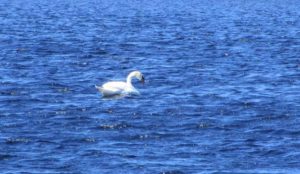 A beautiful, but invasive, mute swan at Helmetta Pond

“POND PIGS” AT HELMETTA POND: While beautiful, mute swans are a non-native bird that have been naturalized in America – and are disrupting the natural world around them. They are aggressive to humans and animals and deplete food supplies. There were brought to this country from Europe in the late 1800s and early 1900s.

LAST SNOW OF THE SEASON: Since the winter of 1995-1996, it has snowed as late as April 16 (April 9-10 for accumulating snow). Judging from the upcoming weather forecast, we probably had our last snow of the season, which was March 15.

OCCASIONAL LOUDNESS OF THE NEW JERSEY TURNPIKE: Wonder why the sound of the Turnpike is very loud at times, well beyond the quiet background noise? Probably because of warmer temperatures in the air compared with colder ones at the ground level.

GREEN WATERING OF THE GARDEN: Last year, I used a combination of drinking water from the house spigot and “gray” water (used bathing water). I got thinking about conserving house water – or even more conservation than I already do – and not putting soapy bath water into the garden. So, this year, 1. I am going to try using more accumulated rain water, making sure I keep the barrel covered when not in use so as not to promote mosquito breeding; 2. I am going to try to use available fresh water, perhaps from Manalapan Brook and a nearby swamp.; and 3., Conserve even more water at home. (In the 15 years since I have been taken over the family house, I have cut water usage by up to about 50 percent, the results of a bathroom renovation and conservation. 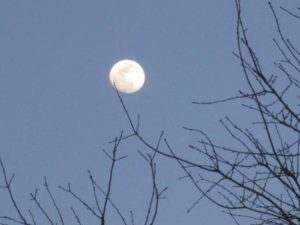 The near-full moon over Manalapan Brook in Monroe

DROUGHT: With the recent rains, drought concerns may be lifted in the coming days by the state Department of Environmental Protection.

Joe Sapia, 60, is a lifelong Monroe resident. He is a Pine Barrens naturalist and an organic vegetable-fruit gardener. He gardens the same backyard plot as did his Italian-American father, Joe Sr., and his Polish-immigrant, maternal grandmother, Annie Poznanski Onda. Both are inspirations for his food gardening. He draws inspiration on the local Pine Barrens from his mother, Sophie Onda Sapia, who lived her whole life in the local Pines, and his grandmother.