Article and photo by Joe Mish 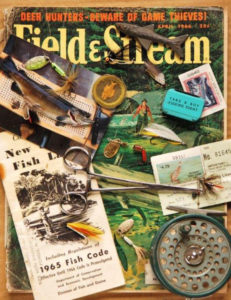 Field and Stream dreams come true on the South Branch of the Raritan. Opening day of the NJ trout season stirs memories as strong as a lifetime of Christmas morning and birthday surprises.

Right along with the anticipation of presents on Christmas morning, April and the opening day of fishing season both involved a dedicated countdown. For a month, each passing day was marked with a big X on the complimentary Esso service station calendar. It was understood, there would be no sleep on the eve of this once a year event.

Times have changed but tradition still lingers as many NJ anglers prepare for the opening of trout season in early April. One of the best places to live out a fishing fantasy is in Branchburg. As the name implies the township is bound for the most part by the North and South branches of the Raritan River, both heavily stocked with trout by the NJ Division of Fish and Wildlife.

Of course trout are not the only game in town. As the river flows from the mountains to the sea, fish can swim upstream as well as down. What that means is tiger muskies and hybrid bass can find their way downstream from Spruce Run as well as stripped bass, hickory and American shad can migrate upstream from the Atlantic Ocean. The state had been using an underwater camera to monitor quantity and species of fish in the area around the confluence of the Raritan and Millstone rivers, species you wouldn’t believe were observed. It was reported in a news article several years ago that trophy brown trout, walleyes, muskies, stripped bass, shad and several forage species were recorded. The beauty of fishing a river is you never know what you might catch.

While trout get the most press, the lower river is primarily a seasonal trout fishery with most angler activity occurring around opening day and subsequent stockings. It is considered to be ‘put and take’ fishing. There are holdover trout but you have to search for them. It is reported trout will travel distances to find suitable habitat with the water temperature being a prime factor. Each species has a preference for a specific temperature range so be sure to carry a thermometer if you want to become serious about your fishing.

The South Branch is also chock full of smallmouth bass which are a year around fish. Fish in the twenty-two inch range have been reported. Smallmouths in the twelve to fifteen inch range have a tendency to tailwalk on the surface of the water while their big brothers often stay deep and pull hard. My favorite lure for these ‘bronzebacks’ is a Panther Martin spinner with a small curly tailed grub on an ultralight fishing rod. Always have a hemostat or thumb forceps handy to remove the hook from any fish you wish to release.

Fishing methods and equipment span the spectrum of human imagination and most are effective on any given day. Expensive Orvis fly rods to lawn chairs and igloo coolers, garden worms to woolly buggers to Mepps spinners all take their share of fish. Fishing allows for as much science, superstition or tradition you might want to use in your piscatorial pursuits. There are even solunar tables which scientifically predict the best days to fish, however, everyone knows the best day to fish is whenever you get the chance.

So if your bumper sticker proclaims, “the worst day of fishing is better than the best day at work”, you already have your gear in ship shape condition and have started your countdown to the April 8th NJ trout season opener for 2017.