Photos and Article by Joseph Sapia

A pond at Szeliga’s Orchard

On this near-to-Christmas day, I was without my Jeep, which was in the shop for most of the day for routine, but time-consuming, maintenance. Without a vehicle, I was living life by foot – walking a mile or so to lunch at the old general store in Helmetta and picking up my mail from my third-generation Post Office box next-door. The walk was to be pragramtic, rather than playful, although I chose a route skirting the woods, instead of walking the Main Road directly from my neighborhood.

After 60 years of living and about 40 years as a journalist, I should know, Be ready for what is out there, unexpected or not. As a woodsman here in the Pine Barrens around Helmetta since old enough, I should know, A walk is not simply a walk.

So, I was glad I put my camera in my pocket.

Before I even left the neighborhood, I came upon a cluster of holly, thick with leaves and holding many berries. A Christmas treat – and my first photographs.

After about three blocks, I went afield, getting on the Pipeline, then onto the freight railroad tracks. Almost immediately on the tracks, I saw a dead mouse lying on a tie between the rails . A victim of a hawk or fox or some other cause of death? I do not know, but another photograph. 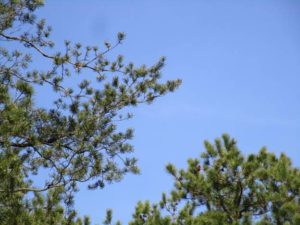 After crossing Saw Mill Brook, I noticed a third pine in the old Szeliga’s Orchard: white, with supple needles in clusters of five. The species being easy to remember with its five needles, or W-H-I-T-E. It is not a native, here. This was probably an escape from nearby houses.

In the old orchard, I saw ground pine, or Lycopodium. Also, there was a nice little pond – I knew of the swamp, here, but did not remember this much ponding. And there was a fallen tree trunk, pecked by a woodpecker or woodpeckers.

I got to the former worker homes of the George W. Helme Snuff Mill — which ceased production in 1993 and, this year, opened as apartments — and cut through the alley dividing them. After a visit to the Post Office and lunch at the store, I walked to Helmetta Pond.

There, I found a thin layer of ice along the shore – the temperature was now in the low 40s, but overnight it had got down to about 30. Canada geese sat in the pond on its other side by the woods. There, it was a mix of pines on the high ground, swamp hardwoods and Atlantic white cedar in the wetlands – and, it seemed, more and more invasive Phragmites reed grass.
On the way back, I took photos of ice in a ditch and Shekiro’s Pond, which had a cluster of punks, or cat-tails, dying off in the cold weather. Shekiro’s was fending off Phragmites nicely, unlike the Pond to the north and Cranberry Bog to the south.

At the Bog, I spooked a great blue heron, which took off slowly in flight. But not slowly enough for me to get a photograph. I did stop nearby, though, to shoot a stand of birch on the old Shekiro homestead.

On my way home, I was treated to a ConRail locomotive pulling two hopper cars toward Jamesburg. I snapped photos of the train, glad I had the camera with me over these few hours. 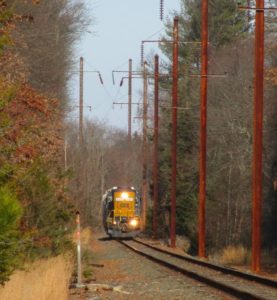 A ConRail train in Helmetta, heading toward Jamesburg