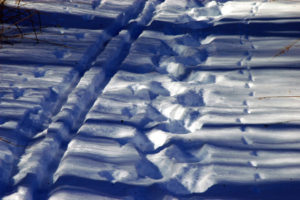 The hiker skier and the fox

passed this way on a snowy walk

The same path was taken on that day

Though each saw things a different way

Dawn was hardly accomplished when the charcoal sky, stirred by a strong cold wind, began to hurl sharp ice crystals against the dry fallen leaves. The High velocity ice pellets struck the forest floor to reverberate against the dry leaves and create a mesmerizing steady hum.

The expansive old woods, now under siege by the late November weather, had a logging road cut through it sometime in the past that now resembled a linear scar threading through the trees. The thick canopy of branches blocked the sunlight to prevent the cut from healing and provided an unobstructed view and silent pathway, for at least a hundred yards. Any bird or animal travelling across the woodlot could be easily seen.

From my vantage point, where the road curved around a large boulder to the straightaway before me, I paused to take in the view. The falling ice began to accumulate; it was like watching an invisible hand weave a white rug on a rough umber tinted latticework. The ice would take turns with large snowflakes as this tandem team laid down white pavement on the road. The thick canopy of branches in the surrounding woods prevented much of the falling snow from reaching the ground. The white flakes and ice crystals that fell here resembled a light scattering of powdered sugar that stood in stark contrast to the near solid white woods road.

The woods are transformed with a light snow as hidden pathways and game trails show up as white lines and the thick woods instantly fitted with clear windows into the woodland depths. Any animal previously hidden by the labyrinth of branches in the one dimensional muted background of similar color, now are exposed as dark forms against white as they pass through these previously invisible portals. The slightest movement, even at a distance, now betrays an animal’s presence as sound becomes an irrelevant turncoat.

Feeling chilled, I was about to resume my walk when a quick movement in the woods caught my eye. Like watching a silent movie in black and white, a woodland drama was about to unfold.

Some small, fast animal was running along the ground in a straight line, on a course that would take it across the woody lane. In short order it appeared in the open and I was still questioning its identity. I could now see this was clearly a bird as it looked like a pigeon, though slightly larger. It was so odd to see a bird running instead of flying and given its speed, its health did not seem compromised. The fleet footed bird was a ruffed grouse! I recalled seeing grouse feeding in the predawn light on other occasions and thinking how they resembled pigeons.

In less than 15 seconds, another larger form appeared and was clearly running along the same track as the grouse. This was a red fox!

The fox had probably gotten a glimpse of the grouse, lost sight of the bird, then picked up its scent to begin the chase. The grouse felt confident enough it could escape on the ground as the fox was in steady but lagging pursuit.

The bird would take to the air if the fox came within striking distance and barring intervention from a hungry cooper’s hawk, the grouse would enjoy the rest of the day in peace. The fox was on a foolish pursuit chasing an alert grouse. Its hunger in full argument with its experience arrived at a compromise and the chase began in deference to hunger.

I waited another few minutes and couldn’t resist trying to call the fox in. Like magic the fox came running, sat at the edge of the lane in the white snow and stared in my direction for a good minute, stood up and trotted off.

As the fox disappeared in the distant woods I again began to walk down the canopied lane enjoying the snowy woods.

The old logging road weaving through the trees scattered with snow brought the lines from poet Robert Frost to life. From “A road not taken”:

“… and looked down one (road) as far as I could, to where it bent into the overgrowth”.

Then the line from Stopping by the woods on a snowy evening:

“…to watch his woods fill with snow”……

“The only other sound’s the sweep

Of easy wind and downy flake.”

Unwrap the gift of a light November snow and enjoy sights and sounds that have inspired the verse of American Poets.