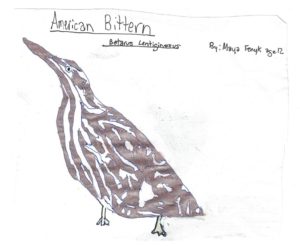 Hi! I am Botaurus Lentiginosis but you can call me Anthony, the American Bittern. I live in thick marshy areas that are dense with vegetation, such as wetlands or freshwater marshes. Unfortunately humans have destroyed and drained most of my natural habitat. This act alone almost diminished my population to 0 throughout the first half of the 20th century. Sadly my species faces even more threats to our survival, such as hunting. Even now in the 21st century where we have a lot of environmentalists looking out for us, there still aren’t enough protective measures in place to take us off the Endangered Species list. We are a shy bird, hard to research, and the amount of American Bitterns in New Jersey is still unknown. Scientists aren’t even sure if our population is increasing or decreasing!

Not much can be done by the ordinary citizen to help bring back our population. I would ask, though, that you don’t hunt my species, and if you see me report the sighting to an environmental agency pronto. I also have a favor to ask of the big development companies. Stop developing on wetlands and other habitats of animals! The act of developing on our homes alone severely destroys our species and others alike. But it’s not just for my sake I am saying this, wetlands are a natural barrier between water and other habitats (of animals and humans). And wetlands decrease flooding risk, which could potentially save lives.

If you saw my species regularly, which I doubt since our feathers camouflage us into the reeds of our marshy habitat, you would say we are kind of cute. We are a stocky medium-sized wading bird that is striped white and brown on our heads, neck and upper part of our body for the rest we are light brown. But watch out, even though we are shy and prefer the flight response instead of fight if we are corned we will use our yellow spear-like bill! At each stage of our life cycle we are pretty cute too. We hatch at about 24 days and stay in the nest for 2 weeks but even after we fledge we remain dependent on our mom for food and shelter for another two weeks.

Humans, don’t worry. Even though I have a spear-like bill I won’t eat you. But still, don’t approach me. My species eats small mammals, amphibians, reptiles, crustaceans, mollusks, fish, and insects. And even though I am the Lower Raritan Watershed’s resident American Bittern, my species can be found from Canada to Mexico! Thank you for reading about me today – and please make a pledge that you won’t damage my habitat further, right? Now excuse me I hear a great horned owl – I must hide! Kok-Kok-Kok. (that’s the sound of my call).