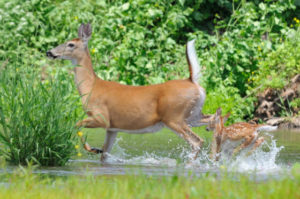 Doe and fawn kick up thie heels in the cool water of the South Branch of the Raritan.

Deer love to wade in the river, even at noon, on the hottest summer days

The low dam at Red Rock Lake turned the water of the South Branch inside out to create an unbroken white line along its length. Here, the living water falls upon itself in an act of resuscitation, no different from lifesaving CPR.

Below the dam, the freshly oxygenated water rushes to fill a deep cut in the river bed funneling its energy, impeded elsewhere by shallows and exposed tree roots.

At the start of each trip, below the lake, I do an upstream ferry across the fast water as a tribute to the river’s energy. I provide the proper angle and the river obliges with a free ride across the current with no downstream slip. Angle the bow into the opposing current and the boat spins into a downstream posture to start another river journey through the high summer season.

The water’s surface reflected the bright blue summer sky and lush greenery along the shoreline. The river banks falsely declaring a limit to the infinite reach of the sky.

August is indeed high summer, all plant life at full maturity vying for sunlight, slender and long, eager to dance in the gentle summer breeze.

Lush, light green grass hung over the river bank in one treeless stretch when I saw a painted water snake swimming to the opposite shore. Only the head of the snake, which created a small wake, betrayed its presence. As I neared, the snake slightly altered course. A few feet from the left shore it suddenly rose up, as if struggling. It would have had to press up against something to rise as high as it did and since the water was still quite deep, it begged investigation.

In an instant a snapping turtle’s head broke the surface of the water, draped in dark green grass and holding the snake near the end of its tail end. Such a non vital hold promised a long struggle and struggle the snake did. I began to record images of this fight for life, so inconsistent in such a peaceful setting. 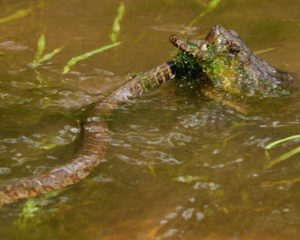 The surprise reptilian clash held the colorful snake in close contrast to the turtle’s head. The turtle’s mouth was more of a razor edged compact beak, a creamy tan with fine vertical black lines. The round orb of its bulging eye and dark pupil were the only recognizable shapes against a pattern of dull and dark brown irregular patches that covered the turtle’s head. The black pupil was surrounded by three thick, dark brown streaks radiating out at 3, 6 and 9 o’clock positions, a pattern quite like a style of crosshair seen in some rifle scopes. 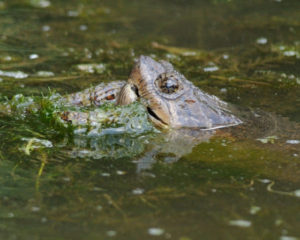 The painted water snake, alias, northern water snake, by its nature, was a linear billboard showcasing a recurring pattern of a variety of shades of tan and orange, and black, the pattern getting tighter and more compact near the tail. The snake must a have just shed, as its colors gleamed to a high shine, enhanced by the water.

This is a painted/northern watersnake; the colors are more brilliant just after it sheds its skin.

This snake recently dined on some other good sized aquatic critter, now seen as the large bulge in the snake’s stomach.

The fight raged on for several minutes, coming to an abrupt end when my boat drifted closer to the combatants. The turtle became intimidated and released the snake, drama over, no evidence of what had just taken place except for some digital images. I imagine the education of both animals was advanced by their encounter.

A mile down river the scenery changed as the main current, hugging the up heaved, high, red shale cliff, was slowed by a gravelly shoal stretching across the river. Here, the high cliff disappeared back into the ground to give way to a woodsy landscape. The river narrowed and water became deeper. The tree tops reached across the river to give the impression of a leafy tunnel. This was a straight, short stretch that now opened up to allow the first river view of the Sourland Mountains. An island divided the river here, diverting more water to the right passage around a sharp bend, than to the left.

The island had a few small trees smothered in tall sun drenched, light colored grass that reached into the shallow water. Recent events had kept the water level far below normal and as a result, the delicate grass began to grow and prosper where it normally would not. The water level on this day was now raised and flooded the fine green grass.

Here, the river bed follows a deep, narrow cut, close to the right shore and obstructed with fallen trees. From the island to the cut, the river was impassably shallow. Coming around sharp bends on an intimate river usually holds the best surprises. Today was not a disappointment as a doe was standing in the water staring at me from 20 feet away.

There was little I could do keep still, as the narrow passage along the bank required some quick paddle strokes to avoid being grounded. That mandatory movement caused the doe to run off, seeming more annoyed than frightened. Behind her were two spotted fawns that splashed away through the shallow water and tender grass. The one fawn ran toward a second doe, keeping close to her heels. Alerted, the doe and fawn ran a few paces and stopped. They really were reluctant to end their mid day romp in the cool river. Water droplets flew in slow motion as the doe and fawn ran off two more times. The light green grass was finely detailed, while the same green scene reflected in the water, lost the detail, but kept the essence of the verdant color to make the foreground and background indistinguishable from each other. The two deer, resplendent in their red summer coats, the fawn, speckled white, complimented the green background. 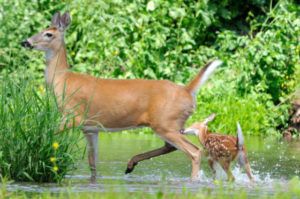 The water exploded from splashing hooves to energize the scene, as it stood in contrast to the reflective water. Raising her pure white tail, the doe provide an exclamation mark to the perfect image to represent high summer on the South Branch.