Photos and Writing by Joseph Sapia
The gardening and yard references are to my house in the section of Monroe between Helmetta and Jamesburg in South Middlesex County. My yard is in a Pine Barrens outlier on the Inner Coastal Plain, the soil is loamy, on the boundary of Gardening Zones 6b and 7a. 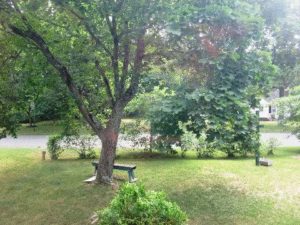 EARLY MORNING HOURS IN THE GARDEN: On Wednesday, I got up around 5:20 a.m. for an early day at work and had the garden half-watered by 6 a.m. I watched the sky change color, listened to a crow, and watched a great blue heron fly by. Peace!

HARVESTING LETTUCE: I dug out 2 heads of lettuce and brought them to work for distribution. Worried the lettuce would start bolting in the heat wave, I was looking to use it up. It turns out there was no need to worry. The lettuce is still producing well, despite the heat.

LAST YEAR’S SUNFLOWERS: I had forgot I have last year’s sunflower crop hanging from the ceiling and drying in the garage. Well, I remembered and began spreading the seeds for the birds, squirrels, and any other wildlife that eats them.

BEARS ON THE MOVE: Various roaming black bear reports have come in over the last week or so: in South Brunswick and Milltown, for example. Stay clear and all should be OK.

FLOWERS IN THE VEGETABLE GARDEN: Cantaloupes, peas, and cucumbers are flowering, the sweet corn is in tassel, and a white flower is blooming. As for white flower, I am unsure if it is growing on its own, part of the pollinator seeds I threw down, or something else. 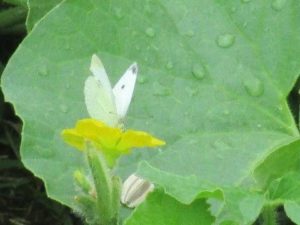 “KNOCK OUT” ROSES: The “Knock Outs” seem to be doing something different this year — peaking, but retaining blooms, rather than losing all blooms until the next peak. 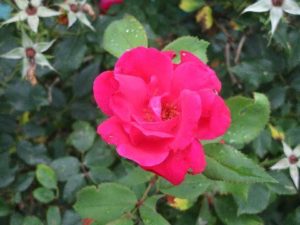 AROUND THE YARD: Stinkhorn mushrooms are popping up. 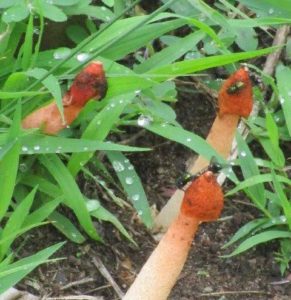 YARDWORK: Saturday’s thunderstorm forecast kept me from my planned trimming of the shrubs and hoeing the vegetable garden. The shrubs can wait, but I really need to attack the garden weeds on Sunday.

QUOTE OF THE WEEK: Friend Jimmy Krygier, a 3rd generation nurseryman of the 100-year Krygier’s Nursery on Cranbury Road just outside Helmetta, noted the perkiness of the vegetation as we were driving a backroad after the recent rains and he said something to the effect of, “The vegetation is smiling because of the rain. Even the weeds.”

DOWN THE SHORE: The clinging jellyfish, “Gonionemus vertens,” an invasive species indigenous to the Asian Pacific Ocean, has been found in the Shrewsbury River and Manasquan River recently. Their stings are very hurtful and could require hospitalization. They are not expected in Raritan Bay or in the Atlantic Ocean. 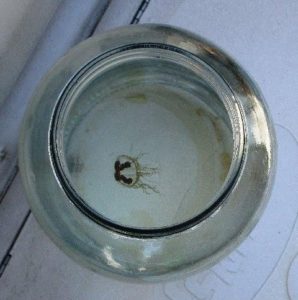 Clinging jellyfish from the Shrewsbury River at Monmouth Beach

SOMETHING TO WATCH FOR: In the local Pine Barrens, watch for the beginning of the “fall” foliage colors from around July 15 to July 30.

Joe Sapia, 59, has lived his whole life in Monroe. He is, among other things, a Pine Barrens naturalist and a vegetable gardener. He gardens the same backyard plot as did his Italian-American father, Joe Sr., and his Polish maternal grandmother, Annie Poznanski Onda. Both are inspirations for his vegetable gardening. And he draws inspiration on the local Pine Barrens from his mother, Sophie Onda Sapia, who lived her whole life in the local Pines, and his grandmother.