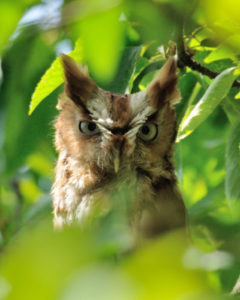 This female red phase screech owl with erect ear tufts and large eyes looks as ferocious as it sometimes sounds.

The calm starlit night, made blacker by the dark phase of the moon, was the perfect setting for a peaceful night’s sleep. The windows were wide open and the air scented with honeysuckle as the gentle sounds of the night played a sleepy time lullaby.

Deep sleep and dreams were well under way when a primal scream, just outside the window, vibrated the walls. Everyone sat up, hearts beating wildly, sleeping coonhounds unleashing unheard of sounds that must have been reserved in the event they ever treed the devil.

Before my heart beat slowed, I figured the sounds had to come from a screech owl perched on a tree limb six feet from the bedroom window. The unearthly screams were one selection of screech owl vocalizations that include rapid clicking of its beak and a gentle wavering call that, through association with spooky movies can easily raise the hairs on the back of your neck.

The volume of a screech owls’ motivated scream is inconsistent with its small size. The eastern screech owl is about 9 inches tall, weighs around 6 ounces with a 24 inch wingspan and easily fits through a three inch nest box hole. 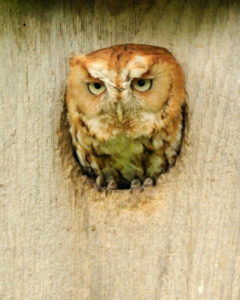 Adult red phase screech owl perches in 3″ hole of its nest box, note the feet gripping the edge of the opening.

Eastern screech owls come in two colors, a red phase and a gray phase. Its physical appearance, while perched, gives the impression it is missing the lower half of its body. During the day with its eyes shut it blends in so perfectly with its background it is difficult to tell what part is what. The owl seems to suddenly appear from the background when it opens its large yellow eyes. 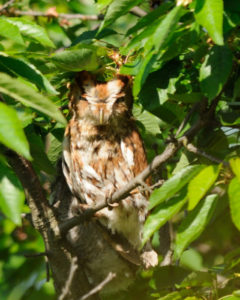 Eyes closed, these owls seems to disappear with no reference to top or bottom or recognizable form. 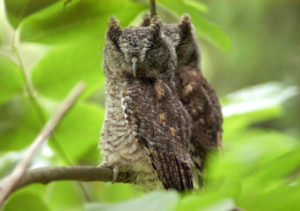 Screech owls seem to comfortably tolerate humans and can be seen, and will nest, in proximity to homes and buildings if a nest box is provided.

Late June early July, a screech owl would show up whenever I went into the backyard around dusk. It would follow me around and click its beak from a nearby branch. I have no idea what motivated that behavior but that owl provide plenty of photo opportunities. 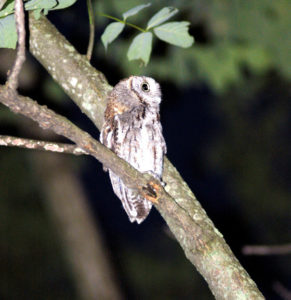 Then there were the memorable Christmas day visits.   One Christmas morning I went to the open woodshed to replenish the woodstove with an armful of oak. There, staring me in the face from four feet away was a gray phase screech owl. It stayed put while I gathered the wood but was gone when I returned with my camera.

A few years later on Christmas night, a red phase screech owl perched a few feet off the ground in a weeping cherry tree. The little owl was spotted by the car’s headlights. It remained undisturbed while I did capture its image. 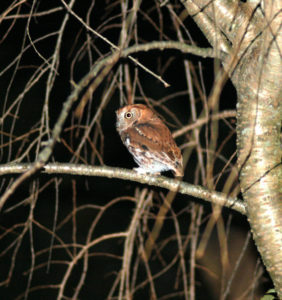 A late Christmas present in full feather, delivered at the front door.

Screech owls may just as well be found in deep woods. I have a great image of a red phase owl sitting in a healed hole in the side of a large tree trunk about eight feet off the ground. Other sightings have been in places where mature sycamore trees grow. Often, broken branches will leave a cavity that overtime becomes deeper, forming a perfect nest or day time resting place for this diminutive owl. 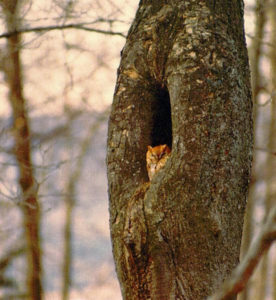 Though screech owls are quite common, you may never see one. Think of them as a night time radio host whose show you listen to all the time but never put a face to the voice. Hear a sampling of screech owl calls at: https://www.allaboutbirds.org/guide/Eastern_Screech-Owl/sounds