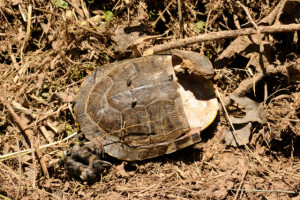 A slow journey that began more than a million years before, ended at the tip of a mower blade spinning at 3,200 rpm. This wood turtle, listed as ‘threatened’ in New Jersey, was killed in late May, while on its way to lay eggs.

May and June have been the peak of the great turtle migration where females, laden with eggs, leave the protection of quiet places to journey far and wide to dig holes and bury their eggs. Incubation takes about 70 days, more or less, and nests are left unattended.

All species, whether aquatic, terrestrial or both, like the wood turtle, seek dry land to lay eggs. Each has a preference for where and when they dig nests, though individual variation is the rule. 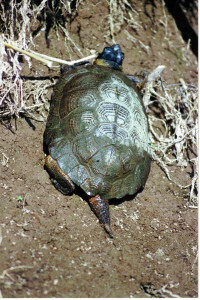 A wood turtle on its way out of the river where it hibernated to lay eggs in the gravel soil near railroad tracks. 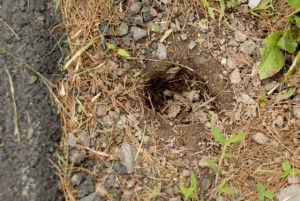 Roadways have become the killing fields for these slow moving reptiles where large blocks of undisturbed habitat are segmented by roads. A preserved island of land may be celebrated as a conservation success but the lack of linear greenways to bridge these islands is a death knell for many small creatures as it exposes them to predation and roadkill. 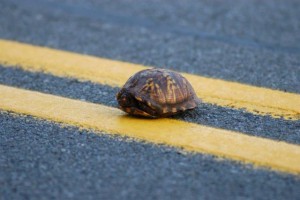 Turtles are creatures of habit and maintain consistent pathways from year to year. So that eastern box turtle you saw crossing over the double yellow line last year will be crossing the road in the same place this nesting season.

State conservation organizations advocate mowing early in the season and then not again until August, late July at the earliest.

A driver may possibly avoid killing a turtle on a paved road as it is somewhat visible, while a turtle in tall grass is a foregone conclusion when a mower runs through a field. The fractured shell of the wood turtle pictured, was found on a path mowed through an overgrown pasture near the South Branch.

Females may travel half a mile from wet areas to lay eggs, so please be careful. As the wood turtle is considered, “threatened “, and known to populate our area, special caution should be taken. May 29, 2015, a female wood turtle was observed digging a nest within inches of a long paved private drive, in hard packed gravel. This would be the last place you’d ever expect a turtle to dig, as you would be hard pressed with a pick and shovel to penetrate that ground. The hole was about 5 inches deep and 4 inches wide.

An awareness of turtles and their nest sites are a prerequisite to protecting them. As the eggs are laid in a small hole, covered and left unattended, you’d never know you were endangering a nest. Many eggs don’t hatch or are destroyed by predators. Then imagine an inch long hatchling trying to traverse a quarter mile through fields and open ground in an effort to reach water, bog or swamp. Survivors are few and far between. 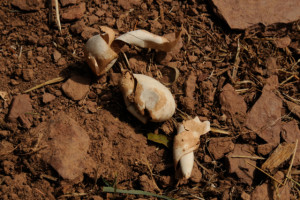 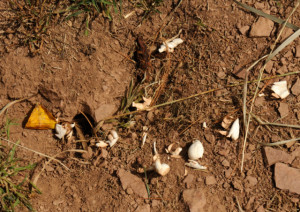 …you will find collapsed leathery egg shells scattered about; though they won’t look like egg shells. Imagine an egg shell make of cloth and inwardly collapsed to appear as a scrap of white material.

With poor odds for survival, it begs at least awareness on our part to, “first, do no harm”, and avoid destroying nests or mulching hatchlings and adults with a mower.

Turtles remain in their essential form that traces back to prehistoric times. Their evolution is an unrivaled success, even more astounding when their slow lumbering movements and low reproduction rate are considered.

Some interesting anatomical features reveal the secrets hidden behind the shell. See how the spinal cord is integral to the carapace or top shell in this painted turtle. The box turtle shell shows the spine as well as the clavicle. The thin plates that line the outer surface of the shell are attached much like a fingernail.

The easiest way to find a turtle nest is to look for the open holes in late summer and early fall. Either the nests were naturally opened by emerging turtlettes or dug out by raiding predators. In either case you will find collapsed leathery egg shells scattered about; though they won’t look like egg shells. Imagine an egg shell make of cloth and inwardly collapsed to appear as a scrap of white material. Last year I found 6 nests, one, just outside my back door. I had never seen a nest before but once I knew what to look for, they seemed to be everywhere. 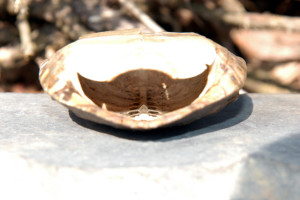 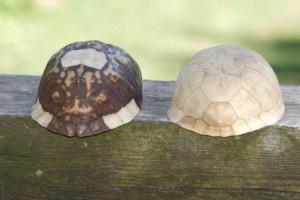 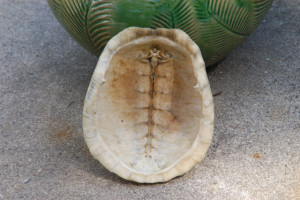 The Unami, one of the three matrilineal clans of the Lenape indians, who lived in central New Jersey, were known as the Turtle Clan. Treating the turtle with respect,  keeps the clan of the turtle alive and well in the land it has known since the last glaciers receded and the land emerged from the sea. Consider, the turtle had arrived at it final evolutionary form long before humans.  As new to the neighborhood, we might look to the turtle for guidance as we would a centenarian, to seek advice on how to live a long life in alignment and peace with our ever changing environment.

Author Joe Mish has been running wild in New Jersey since childhood when he found ways to escape his mother’s watchful eyes. He continues to trek the swamps, rivers and thickets seeking to share, with the residents and visitors, all of the state’s natural beauty hidden within full view. To read more of his writing and view more of his gorgeous photographs visit Winter Bear Rising, hiswordpress blog. Writing and photos used with permission from the author.