Articles and Photos by Joe Mish 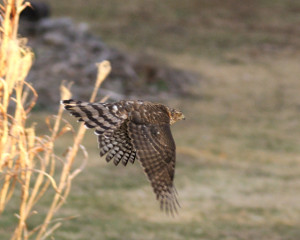 A cooper’s hawk flies off after landing in a holly tree where it jumped from branch to branch in an effort to flush a hiding songbird into the open.

Midwinter is a great time to catch a glimpse of local wildlife, especially hawks, as these large birds stand in dramatic contrast to the gray-brown leafless trees in which they perch.

The most common hawk in our region is the red-tailed hawk. Comparatively large, the adults are recognized by the bright russet colored tail. This is the only hawk whose tail is not banded or bordered by a contrasting color. The young birds have barred tail feathers, alternating russet and white, with no distinct borders. 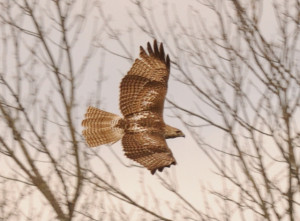 Easy to spot at highway speeds, the light breast and faded red tail stand out like a beacon when perched in trees along the roadway. Locally, I often see these hawks atop telephone poles near pastures and flood plains where they scan the open area for small mammals and ducks. Some red tails specialize in killing gray squirrels, a worthy meal for such a large bird whose energy expenditure in the winter would hardly be covered with mice or voles.

During a winter freeze when most of the river is solid ice, there are always open sections where ducks concentrate in the water and on the ice. A red tail will make an easy meal, especially of the smaller wood duck, flushing it into the air or catching it as it naps on the ice.

Last winter I watched an eagle feeding on a wood duck, speculation was the eagle took the duck from a red tail as eagles are notorious for stealing game from ospreys and hawks. 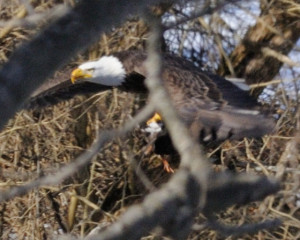 Muskrats are also high on the midwinter menu as the males often travel during the day over ice and snow as they seek food and females to breed.

A hawk requires a large nest and now is the time to scan the treetops and high tension towers for these stick built structures. One local hawk has adapted to a giant oak in someone’s backyard bordering a cluster of recently constructed homes. I have seen several local nests situated high in sycamore trees along the river. Hawk nests are relatively flat and large, not to be confused with squirrel nests which are numerous and quite round, generally built at a lower level, among thinner branches. Red tails will also use ledges as a base for their nests. 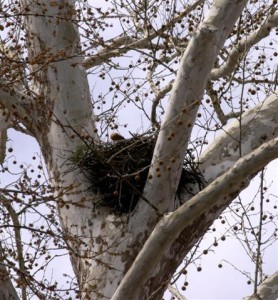 The ultimate adaptation belongs to the red tail known as, Pale Male, whose life is well documented in film, media and print as he has mated and bred several generations of hawks among the skyscrapers in mid Manhattan. His age is estimated at 24 years. Here is one site dedicated to Pale Male.

Marsh hawks share the sky with red tails and characteristically conduct ground hugging flights across overgrown fields, flood plains and grasslands and have an ability to hover in place. These hawks are slightly smaller than a red tail with dark brown coloration and a boldly banded tail. The key to identifying a marsh hawk is the bright white rump patch. These hawks are common, though not often seen and are known to migrate while red tails remain as full time residents. 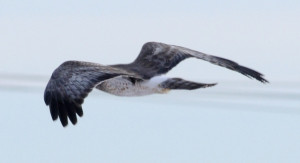 Aside from red tails, the most often seen hawks are the coopers and sharp-shinned hawks. The coopers being slightly larger than the sharp shinned. Both hawks feed on songbirds and small rodents. As each is similarly marked, identification is always controversial. More often than not, someone will submit a photo of a hawk to a website asking if it is a coopers or sharp-shinned and the replies are often split, each summarizing why they made their choice. I see the larger coopers preferring doves and rabbits while the sharp shinned has left piles of bluebird, indigo bunting and flicker feathers about the yard.

Lastly, look for the diminutive sparrow hawk, now known as the kestrel, typically perched on telephone poles and wires along open fields. This bird is about the size of a large dove, feeds on insects and small rodents. Kestrels are known for hovering before they dive on their prey and this stationary flight is a good identifying characteristic. The males are brilliantly marked with blue, shades of russet, black and white. At first glance a perched kestrel will appear as a songbird so be sure to give a second look. They are considered threatened in New Jersey and a nest box program and monitoring effort is having a positive effect on their recovery. The birds are easily baited and trapped for tagging and data collection. 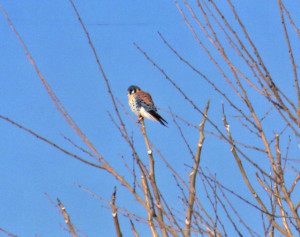 This is the winter of the hawk and hardly a commute is possible without being evaluated by a feathered predator. They can see you, can you see them?

Author Joe Mish has been running wild in New Jersey since childhood when he found ways to escape his mother’s watchful eyes. He continues to trek the swamps, rivers and thickets seeking to share, with the residents and visitors, all of the state’s natural beauty hidden within full view. To read more of his writing and view more of his gorgeous photographs visit Winter Bear Rising, his wordpress blog. Writing and photos used with permission from the author.